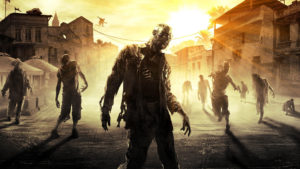 Jason looked around at the men sitting next to him on the chopper. “How did I get myself into this?” he thought as he took a deep breath in and exhaled out trying to calm his building anxiety.

Jason Romeo was a member of a very specialized task force known as the Specialized Search And Rescue Team or SSRT. To the general public, they were known as The Archangels. Ever since the outbreaks began, they became the first responders in rescuing people from the undead.

“Alright, gentlemen this has been upgraded to a level 2 outbreak,” said a tall, slender man in his mid-30s who looked about ten years older than he was. A level 2 outbreak refers to outbreaks of between 100 and 1000 infected.

The man relaying the message was Lieutenant Chris Marshall of the third SSRT.

Chris had been a member of the SSRT since the beginning of the SSRTs eight years ago. The burnout rate on average is three years. Something about the carnage of killing the undead and seeing people ripped to pieces and people half eaten in the aftermath of an outbreak tends to screw with one’s mind, but somehow Chris was able to compartmentalize it, or so the other Archangels thought.

In truth, he wasn’t totally able to compartmentalize it. Chris lost a lot of good men on missions like this one and learned to keep his fellow Archangels at a distance. Chris learned early on that it is easier to lose someone if you aren’t close to them. Besides this fact, the SSRT was all he had.

His wife left him, and he hasn’t seen his five-year-old daughter in a year. He thought it was better this way. He knew one of these times he would not be coming back, and it would be far better for his wife and kid if they weren’t attached to him.

“Five minutes!” The Black Hawk pilot yelled back to the waiting men each trying to gather their thoughts about what was about to go down.

“Shit! It is time to get some!” Yelled Bobby to the other Angles. He let out a maniacal laugh and was smiling ear to ear like a kid on Christmas who just received a new bike.

Bobby Parker was a short, skinny man in his early 20s with a mustache that was barely visible and spoke with a thick southern drawl. Jason wondered if Bobby was all there. At times he seemed like he loved this job a little too much, but Bobby was always willing to step up for his brother in arms.

A wide-eyed Bobby was caressing his suppressed CZ Scorpion like it was a beautiful woman that he loved. “Let’s fuck some shit up!” he yelled looking at Jason.

“Hey, Bobby we aren’t Reapers,” said Nick in a disgusted tone referring to the SETs or Special Eradication Teams. These were the teams that were responsible for the clean up after the SSRTs cleared the area. Anything left standing after the SSRTs did their job was fair game to the Reapers to move in and destroy as the support teams blocked off the area ensuring none of the infected would escape.

Nick Thompson was a profoundly religious man. He was in seminary studying to become a priest when he felt a calling from God to serve and protect people from the Undead in another way. He quit the seminary to become an Archangel.

Nick didn’t buy into any of these theories. He was convinced that the outbreaks were the wrath of God for the wickedness of the world, and these undead souls were demons walking the earth seeking the ruin of men. It was now his holy mission to fight back against the undead. Like others before him, this was his test before God.

“Will you two please shut the hell up!” Said a large black man sitting to the immediate left of Jason. “We get it. You want to wreak havoc on the Zeks,” pointing to Bobby, “and you want to save the world from the evilness of the devil,” He said while looking at Nick. He closed his eyes and leaned his head back against the hard cold metal of the Black Hawk.

This man was Ben Hill. Ben was from Norfolk, Virginia if you really could say that he was from anywhere. He was the son of a Navy Capitan and grew up on Navy bases. Ben served out of a sense of duty to country. He was also the chief medic on the team. His first concern was the health of his teammates and then the health of the survivors that they might find in this hell on earth.

He was by far the most sensible and intelligent person on the team. He is the one that took Jason under his wing when he first came to the Third SSRT. He never hazed Jason like the others. He was through and through a protector. He was like the big brother Jason had been missing from his life ever since the first US outbreak.

“Two minutes!” The yell came from the front of the chopper.

“Hey Jason, have you seen the new Star Wars trailer yet?” asked a calm and collected Mike Ambrose in a tone that could have been overheard between two friends waiting for a bus.

“What?” Jason said in disbelief that anyone could ask a question about a stupid movie trailer two minutes before dropping onto the heads of 1000 of the living dead. “Are you insane!?”

They weren’t sure that they were going to make it back, and this man was asking about movie trailers, but that is just the way Mike was. Always calm and alway collected.

“Chill out, man,” Mike said smiling at Jason. “I am just trying to break the ice. What is going is going happen. All we can do is hold on and ride the lightning.” Mike winked at Jason.

Mike was the calmest person Jason had ever met. He seemed never to get rattled and was never scared of anything. Mike was just level-headed and calm. Jason would swear that Mike was on some type of calming drug, but he knew they were always drug tested. Although it all could have been an act, he felt that Mike was really that calm.

“This was it!” Jason thought. This mission was his third drop and his first into a level 2 Outbreak. The other two were level one drops. Every time the threat level went up the danger increased exponentially. Jason grabbed onto his CZ Scorpion until his knuckles turned white as the door opened exposing the Archangels to the fridged winter air.

“30 Seconds!” The call came from the co-pilot with a sense of urgency.

The large 20 story apartment building that they were going to be dropped on came into view. This target was known as the “X.” The power was down to the building due to the Blizzard-like conditions that they were traversing. The Black Hawk pilot struggled to keep the helicopter under control as it was battered by the strong wind and the blowing snow.

The chilling wind whipped into the cabin as the side door of the Black Hawk crept open. The visibility was low as the ropes dropped from the Black Hawk. “Godspeed, Angles,” The co-pilot said not knowing if they would make it back. A level two outbreak with a single SSRT was extremely dangerous.

Chris grabbed the rope first and descended to the rooftop from the hovering helicopter above. Chris was always the first Angel on the X and was also the last Angel to leave the X. Chris was old school like that. He would lead from the front and would never leave a man behind.

Bobby yelled, “Time for some fun!” As he fast roped next to the rooftop below the hovering helicopter.

Chris and Bobby set up a perimeter at the bottom of the rope to safeguard the rest of the six-man team. Each man was taking a knee with their submachine guns trained the door leading into the apartment building. Their Scorpions locked and loaded awaiting an attack from the dead. If it came, there would be no exfil possible. It would be them verse the zombie horde. They would have to fight their way out.

With their body armor, a level one outbreak would be easy enough to fight off. When the outbreak level was at two things got a lot scarier. It was easier to be overwhelmed by more than 100 zombies that it is by 10 of the dead.

Mike was the next to go. Without a word he grabbed the rope and slid down to the rooftop below. He took his spot on the perimeter. The longer the helicopter hovered, the more attention they would attract from the undead. The one advantage in infilling in near blizzard conditions is that it does mask your tracks.

Nick bowed his head and said quietly to himself, “Holy Michael, the Archangel, defend us in battle. Be our safeguard against the wickedness and snares of the devil. May God rebuke him, we humbly pray, and do you, O Prince of the heavenly host, by the power of God cast into hell Satan and all the evil spirits who wander through the world seeking the ruin of souls.”

“Amen,” Ben interrupted “Now get moving before I throw you down there.”

Nick grabbed the rope and stepped out of the Black Hawk into the cold wintery night repelling towards the rooftop.

“You know, Jason,” Ben said with a smile, “Sometimes I feel like I am Santa Claus fast rooping onto these rooftops all the time.”

Jason looked at Ben and said, “Yeah I really fucked out Santa Claus.”

Ben gave a big laugh patting Jason on the back and said, “Now get your ass down there, Rudolph.”

At that comment, Jason grabbed the rope and leaned out of the Black Hawk. The air bit at his face, but his fear kept him warm. “How did I ever get into this position?” He thought.

Then it all flashed back to him. All the way to the beginning of the first outbreak country. That event changed his life forever. On that day a course of events took place that all lead to him fast roping onto a building full of cannibalistic undead that would like nothing more than to rip him and his teammates into pieces.

South Dakota With Most Concealed Carry Permits Exempt From NICS